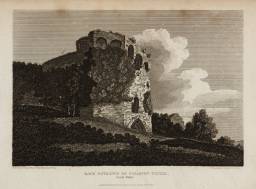 This little-known Gothic novel was published anonymously at Maidstone in 1846 by J.V. Hall and Son (presumably for the Christmas market). A curious mixture of the Gothic narratives of Ann Radcliffe and the ‘silver fork’ novels so popular in the 1840s, it tells the story of a persecuted heroine whose happy marriage to the handsome young heir of Beaulieu Abbey is threatened by the appearance of the terrible spectre of the Black Monk. Meanwhile, her companion and childhood friend, Cecilia Herbert, has to deal with the sufferings of her mad half-sister. Eventually, the supernatural elements of the novel are rationalised in Radcliffian fashion – but not before a sensational family secret has been revealed.

The Castle and the Abbey [Kindle]

The Castle and the Abbey [Epub]

The Castle and the Abbey [PDF]