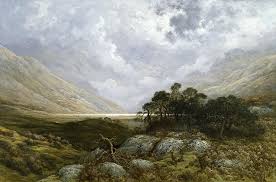 Colin Campbell is one of those writers about whom frustratingly little is known. “Colin Campbell” was the pseudonym of Douglas Christie (1894-1935), the author of several novels under his real name and under the assumed one. At least three of the novels written as “Colin Campbell” feature the occult detective, Larry Neal. The first, Out of the Wild Hills (1932) is very definitely supernatural, while the third, Murder on the Moors (1934) is a standard whodunnit. The second, Murder Up the Glen (1933), is an altogether more ambiguous affair.

Lorin Weir, visiting a friend in a remote part of the Scottish Highlands, is startled to witness a brutal murder, apparently committed by the local ghost known as the Black Walker. No solution, either supernatural or otherwise is given to the murder – and even though it is strongly hinted that the affair has a supernatural solution, no explicit details are given as to what exactly this might be. Neal simply insists that the narrator (and the reader) have been given all the information required to solve the case. The publisher’s blurb in the first edition promotes the novel as having a solution that will satisfy “connoisseurs” of the mystery genre – but frankly, I can’t help feel the inconclusive ending makes this unlikely.

As a supernatural or Gothic mystery, however, the novel is far more satisfying and its atmospheric evocation of a haunted highland landscape of ancient burial mounds, populated by superstitious locals who wouldn’t venture out on Beltane for any price, makes it very much worth reviving for modern readers interested in early-twentieth-century supernatural fiction.

Murder Up the Glen [Kindle]

Murder Up the Glen [Epub]

Murder Up the Glen [PDF]

IMPORTANT NOTE: Unfortunately, this work is not in the public domain in the U.S.A. – in order to comply with United States copyright legislation, readers in that country should not download the ebook.

1 thought on “Murder Up the Glen: A West Highland Story (1933) by Colin Campbell”